back to Hall of Fame Inductees: Graduates/Students

Sam Tucker
Sam grew up on Weston Mountain on the family farm and attended all of his schooling years in Weston.  He graduated with high honors from Weston High School in 1969.  While in high school he was a three sport all-star in football, basketball and baseball.

He then attended Duke University Law School from 1973-76 where he graduated with honors and received his Doctorate of Juris Prudence (Law degree).   While at Duke Law School he was the executive editor of the Duke Law Journal, and a member of the Mordache Society (student chosen from each class as the highest representative of the law school and its values).

After graduating from law school he returned to the area where he practiced Law in Pendleton for four years before becoming a partner with the Milton-Freewater firm of Monahan, Grove and Tucker in 1980 where he continues to work.

Sam is an avid runner and has participated in several marathons, including the Boston Marathon, Chicago Marathon, the Portland Marathon and lots of other local marathons.

Sam has been married to Sara since 1980 and they continue to live on the family farm on Weston Mountain.  They have three grown children. 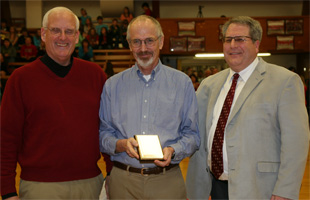